Most of you know that our sweet cat Casper was attacked by a bobcat on our deck February 26th.  My son Z and I were just sitting down when we heard the cat fight on the deck.  I assumed it was "just" a cat fight.  Nope. I went out the mudroom door screaming to break it up and before I even got to that door Z looked out the glass sliding door and saw the two cats going at it.  He opened the door and ran outside just as I rounded the corner.  For some reason Casper got away and hid under my little Honda Fit.

We were in full on panic mode.

I screamed at Z to close the doors and turn on all the outside lights.  He was screaming at me asking if Casper was ok.  I was barefoot and since there was a thick layer of ice on the ground I grabbed my camping bedroll (yeah, I like to lie on the deck and look at the stars so it's stored in my mudroom), threw on some boots and did my best to inch my way far enough under the car to grab Casper.  He wasn't budging and I knew that I had one chance to get him by the scruff and drag him out.  I am shocked I didn't break his legs in the process but I did manage to get him into the mudroom and into safety.

I could feel the adreneline surging in my system and I had no idea how much damage had been done.  Zach was desperately asking me if he was going to live and how badly he was hurt.  I knew that before I did anything I needed to regroup.  So I told Z to call in all the angels and start praying.  Funny thing about him is when I tell him to do this, it makes sense to him.  That kid can call in some BIG energy, too!  I closed my eyes and started sending Reiki to Casper.  I had my hands gently on his sides.  I could feel myself grounding and his panic releasing slightly.  Then I opened my eyes and looked for blood.

There was blood on his neck and coming out his nose.  I wasn't able to see the wound under his chin, whic h was a puncture wound that also had been sliced when he broke free.  I didn't know what to do..... I felt helpless, sad, scared.  Stunned.  A bobcat had just attacked my cat, I had seen it jump over the railing as it fled from the deck and it was 7pm on a Friday night.  I blotted some of the blood from his neck and opened the door to let him into the house.  I got on Facebook to ask a vet tech friend what to do, and to warn my neighbors that this had just happened.

I have to say that asking people for prayers helped us all get this far in his recovery.

I'm going to fast forward a little to where we are today, March 18th.  He went to the vet that Saturday and Kate Battenfelder of True North Veterinary said that although he had major puncture wounds nothing was broken.  We decided that I'd syringe feed him through his mouth until he was able to eat on his own, and that time would tell how bad any nerve damage was.

A week and a half later he still wasn't eating on his own and it was time to try a feeding tube.  He had an incision on the left side of his neck with a tube going to his belly with the other end extending out and wrapped in gauze to hold it in place.  For a week I hooked it up to the syringe and pushed the nutrition into him.  This was not an easy process and there is a story behind those experiences as well.

Yesterday Casper managed to pull the entire tube out.  I heard him make a funny howl like meow, then silence.  When I went to feed him there was the perfect bandage that I had put on him no more than 45 minutes proir, but no tube.  Tears.  Lots and lots of tears.  Tears of frustration, helplessness, fear.  Casper had decided that he was done with the tube and I know that he has to figure out how to eat on his own if he plans on living.  I'm praying with all I have that he can pull this off.  As I sit here typing it he is sleeping like a king on the couch beside me.  Apparently he's pleased with himself and I'm still freaking out a little.  This really is a live or die situation. 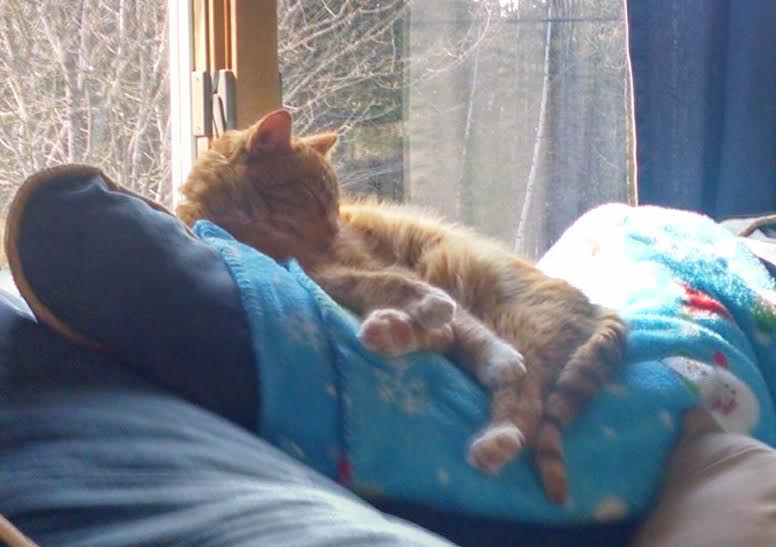 I know that he was attacked by a bobcat that was hungry.  But there are so many more lessons to this that I want to share with you.  The first is that when Z was born I only got 6 weeks off and I had a full time job.  I didn't get to have that gentle maternal experience that I wish it had been.  I was in survival mode for a lot of his early years, and I'm amazed and how he and I came together to help save and heal Casper.  I didn't realize I had that in me.

Second is that I have had many bobcats in my life.  Not the real ones, but people or situations that threatened my safe zone.  I'll leave it at that so as not to call people out, but trust me when I say that I've felt like a target for a while.  I'm back in my power though.  And I'm confident in who I am and what I am capable of.

Another lesson is how we can offer help or support to people, and it's really ultimately up to them if they're willing to be helped.  This I can see happening to me at times, as well as some of the people closest to me.  Again, that topic is worthy of it's own blog!

I guess I'll end it there for now.  I'm sure I'll be writing a book about this sooner than later, but right now I'm going to give Casper all the loving I can.  He's the coolest cat I've ever had and I am grateful for all of your prayers and support.